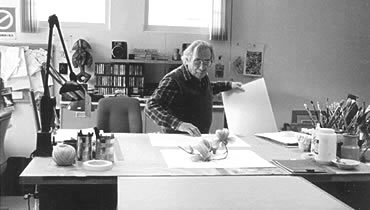 Marius Sznajderman, painter, printmaker, scenic designer, book illustrator, and art educator, was born in 1926 in Paris, France, and escaped to Spain in 1942 with his parents during WWII, eventually moving to Venezuela where he studied at the School of Fine Arts in Caracas under teachers Ramon Martin Durban and Rafael Monasterios, and also the painter and scenic designer Ventrillon-Horber.

He was a founding member of the Taller Libre de Arte workshop for the visual arts, which was responsible for the introduction of contemporary trends in the Venezuelan art world.

He also had his first one man show at the Taller Libre de Arte. As might be expected, his time in Venezuela had a strong influence on his style, color and imagery.

Sznajderman moved to the United States in 1949 where he studied with scenic designer Woodman Thompson and printmaker Hans Mueller at Columbia University, receiving Bachelor of Arts and Master of Fine Arts degrees.

After a stint in the US Army from 1953 through 1955 — during which he served as Chief Artist-Illustrator at Red River Arsenal, Texarcana, TX — he then worked for Circle in the Square Theater and a host of other theater and dance companies in New York City as a scenic designer.

His work as a art educator covers positions in art history and design with New York University, the School of Visual Arts, Fairleigh Dickinson University, the Ridgewood School of Art in New Jersey, and Indian Hill music and art school in Stockbridge, MA.

Over the years he has maintained his contact with his Venezuelan art connections which has led to a number of art-related trips to Venezuela and Mexico. Which in turn led to his promoting of a number of Venezuelan artists in New York in numerous shows produced under his supervision.

He has donated much of his work to various organizations, including costume designs to the YIVO Institute for Jewish Research, illustrative work to the Army Historical Foundation, theatre design to for Circle in the Square Theatre to the New York Public Library for the Performing Arts, and for the French Art Theatre. He also has donated a collect of more than one hundred Venezuelan Art and Culture posters dating from the 1960s to 1980s to the Museum of Modern Art.

He has had more than thirty-one exhibits and numerous group shows in South America and in the US. And has work in the collections of the Smithsonian, the Library of Congress, the Fine Arts Museum and the Museum of Contemporary Arts in Caracas, Venezuela, the Cinncinnati Museum of Art, the Museum of Modern Art, and the Museo del Barrio, New York City, the New Jersey State Museum, in Trenton.

He is also listed in Who's Who in American Art, and in Printworld International, among many other publications.